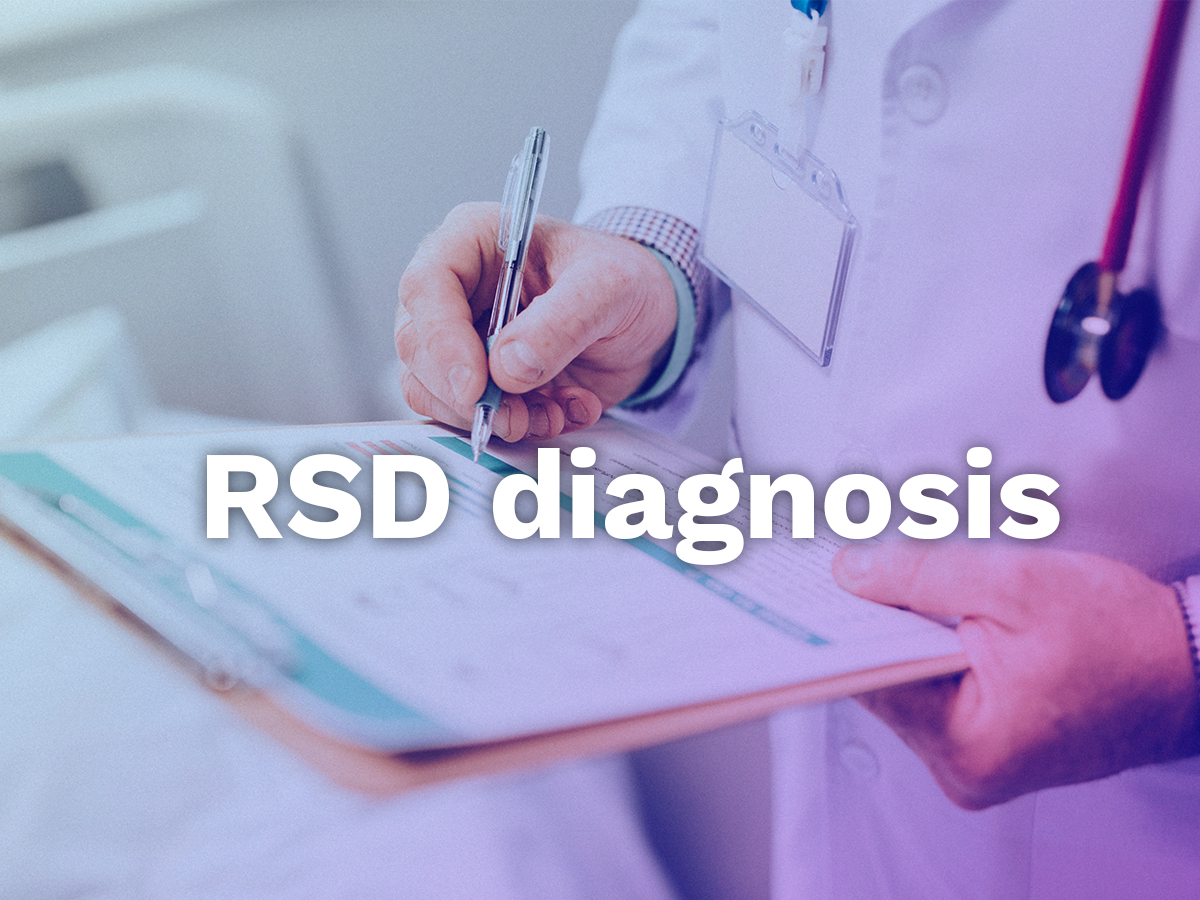 RSD (Reflex Sympathetic Dystrophy) is another common name for Chronic Regional Pain Syndrome (CRPS). This medical condition presents itself as a severe pain in one or more limbs, lasting for several months or longer. Besides pain, RSD patients experience and exhibit many other signs and symptoms including swelling and skin colour changes. Nowadays, RSD is more commonly referred to as Chronic Regional Pain Syndrome (CRPS) Type 1 to differentiate it from the second type which is CRPS Type 2. The two types are differentiated by the fact that CRPS Type 2 often develops in the presence of significant nerve damage, while the onset of CRPS Type 1 is usually attributed to common injuries such as fractures and medical emergencies such as strokes. Despite this one difference, the two types are treated in the same way as they exhibit similar signs and symptoms. RSD is actually the most common type occurring in a majority of patients.

Although RSD has become a common medical affliction among many patients, there isn’t a lot of information on its pathophysiology. This makes it difficult to pinpoint the exact cause of the RSD disorder, how it progresses, and the overall outcome. Even making a diagnosis of whether a patient has RSD or not is difficult, which in turn makes it difficult to treat the affected patient. Regardless, some methods of making a diagnosis of RSD have been established and are currently in use today. These methods rely on the signs and symptoms exhibited and felt by the patient. As such, only a clinical diagnosis of RSD can be made.

This is usually described as deep, aching, burning pain that is disproportionate to the inciting injury. It is the first and most prominent symptom that RSD patients feel before anything else. The McGill Pain Index can help the patient explain the kind of pain they are in and is also useful in identifying whether the pain is RSD related.

This is increased skin sensitivity to painful stimuli such that the patient’s pain is more severe than what would be considered normal for a certain injury.

Similar to hyperalgesia, this is increased sensitivity whereby the patient feels pain from non-painful events such as loud noises or taking a shower.

This may be limited to the affected area but may later spread to other parts of the body. Swelling is usually an effect of fluid retention.

Changes in skin colour can occur due to changes in the weather or for no apparent reason.

Due to vasomotor disturbances associated with RSD, the affected limb has abnormal sweating patterns such that activities that aren’t normally exertive can cause the affected area to sweat immensely.

The hair and nails may change in texture and exhibit odd growth patterns.

The Budapest Criteria for RSD diagnosis

The Budapest Criteria is a guideline created specifically for the diagnosis of RSD. The International Association for the Study of Pain (IASP) created the first version of the guideline in 1994. For the most part, this 1994 IASP diagnostic criteria effectively diagnosed RSD patients through the use of a checklist of signs and symptoms. However, with time, it became evident that the guideline was too liberal, leading to an over-diagnosis such that some patients were misdiagnosed as having RSD and thereafter treated for a medical condition they didn’t have.

As a result, the 1994 IASP criteria was reevaluated at a closed workshop held in Budapest, Hungary in 2003. The new guideline still has the same features as those of the 1994 IASP criteria, but some stricter rules were added to improve the accuracy of the diagnoses and reduce the chance of over-diagnosis.

Some examples of the signs and symptoms checked for include hyperalgesia, allodynia, skin temperature differences, and motor dysfunction. This diagnostic tool has proven to be effective in most cases, but one of the problems associated with using it to make an RSD diagnosis is its reliance on the signs and symptoms. In some case, these are rarely present at the same time so due to insufficient data, an RSD diagnosis may be missed.

Certain medical conditions such as Lyme diseases, arthritis, muscle diseases, and blood clots exhibit signs and symptoms that are similar to RSD. Therefore, since an RSD diagnosis is made on the basis of such signs and symptoms, there is a slight chance of a misdiagnosis if these other medical conditions are not taken into consideration. Even though there are no specific medical tests that can positively identify RSD, some tests can help with the process of elimination. These include the following:

Imaging studies such as X-rays can be useful in RSD diagnosis. As RSD progresses, bone loss develops and may even get worse without treatment. The X-rays show the parts of the patient that absorb or block the rays. In the case of RSD patients with notable bone loss, the X-rays show the status of mineralisation in the bones of the affected side as compared to the opposite side. During the first stage of RSD which is from 0 to 3 months, the X-rays usually look normal. As time passes and the medical condition progresses into later stages, osteopenia is noticeable in the X-rays. The advantage of X-Rays is that they are non-invasive so they can be used as a preliminary test to view bone demineralization and track it as the disease progresses.

This imaging technique along with others such as functional MRI (fMRI), position emission tomography (PET), and single photon emission tomography (SPECT); measure biological activity throughout the body. MRIs in particular use magnetic fields and radio waves to produce 2D and 3D images without the use of radioactive tracers.

Electronic thermographic apparatus are used to carry out these tests. The equipment creates computer-generated images that display changes in temperature. Normally, temperature changes are controlled by the sympathetic nervous system. If there are any changes or disturbances to the sympathetics, then these will be reflected as changes in thermal imaging. In RSD patients, the lack of symmetry in skin temperature patterns can be taken as an initial clinical diagnosis.

These tests measure the skin temperature differences to track vascular movement. Skin temperature variations are one of the many symptoms of RSD, so these tests help to identify those changes. By some guidelines, a difference of 1.5℃ is considered sufficient to distinguish between normal post-traumatic symptoms and those relating to RSD.

As RSD progresses, several changes occur in the body which can be identified by medical tests such as bone scans. The bone scans in particular are used to check for bone loss which usually occurs from the subacute stage of the medical condition. The bone loss is a result of deminerilisation of the underlying bony skeleton that begins in the acute stage.

A specific bone scan that is used during the diagnosis of RSD is the tri-phasic (three phase) bone scan. The procedure for this type of bone scan involves three phases and the injection of a radioactive tracer substance. This substance usually concentrates in the bones, although as the phases continue, the tracer is metabolised by the body.

At each phase, a gamma camera is used to create images from the radiation given off by the tracer when it’s inside the body. The first phase images are taken immediately after the intravenous injection of the tracer. These record the blood flow through the area of the bone being examined. The second phase images are taken a few minutes after the first phase and they record any blood pooling which is an indication of inflammation. After a minimum time lapse of two hours, the third phase images are taken and these usually show any remaining tracer substance that hasn’t been metabolised by the body. An analysis of the remainder of tracer substance gives indication of the rate of metabolism of tissue within the bones.

What Does An RSD Diagnosis Mean?

An RSD diagnosis can seem pretty daunting, especially considering that there is no cure for the medical condition. The fact that the disease’s prominent feature is pain makes things a lot worse. Once an RSD diagnosis is established, treatment should begin as soon as possible. Some patients are lucky enough to have their RSD symptoms disappear after a while, even without treatment. However, it is risky to simply wait out the disease in the hopes that this will be the case every time. The best approach to deal with an RSD diagnosis is to explore treatment options.

RSD has no cure, and so most patients rely on a combination of treatments to get through the day and manage their pain. The RSD treatment combo includes medications, physical activities, physiotherapy, and even occupational therapy. The medications are usually prescribed to manage pain and may include a variety of drugs such as analgesics, opioids, and anti-inflammatory drugs. Most of these offer short term relief from pain and unfortunately, they don’t always work for everyone.So far, the best drug available for RSD treatment is Neridronate. However, this drug is only approved for use in Italy, but it has the best, long-term results so far; even showing evidence of total remission from RSD.

Physical activities help the patient move their painful limb so that they can regain functionality and manage their pain better. The physiotherapy is necessary to take care of negative emotions such as depression and anxiety that are associated with living with chronic pain. If these problems are not addressed, they may lead to emotional stress, which in turn causes flare ups, leaving the patient in even more agony. Occupational therapy helps the patient find ways to get back to their daily tasks or jobs, in spite of their condition.

With proper treatment, RSD patients can live a fairly normal life that isn’t riddled with severe pain. The prognosis is not fixed or clear, but the best chance for recovery is early treatment after a confirmed RSD diagnosis. Some cases of RSD go into remission, leaving the patients symptom-free for months, years, or even indefinitely. This can be a result of certain treatments, especially the bisphosphonate Neridronate. If the RSD is mild, then remission may also occur.