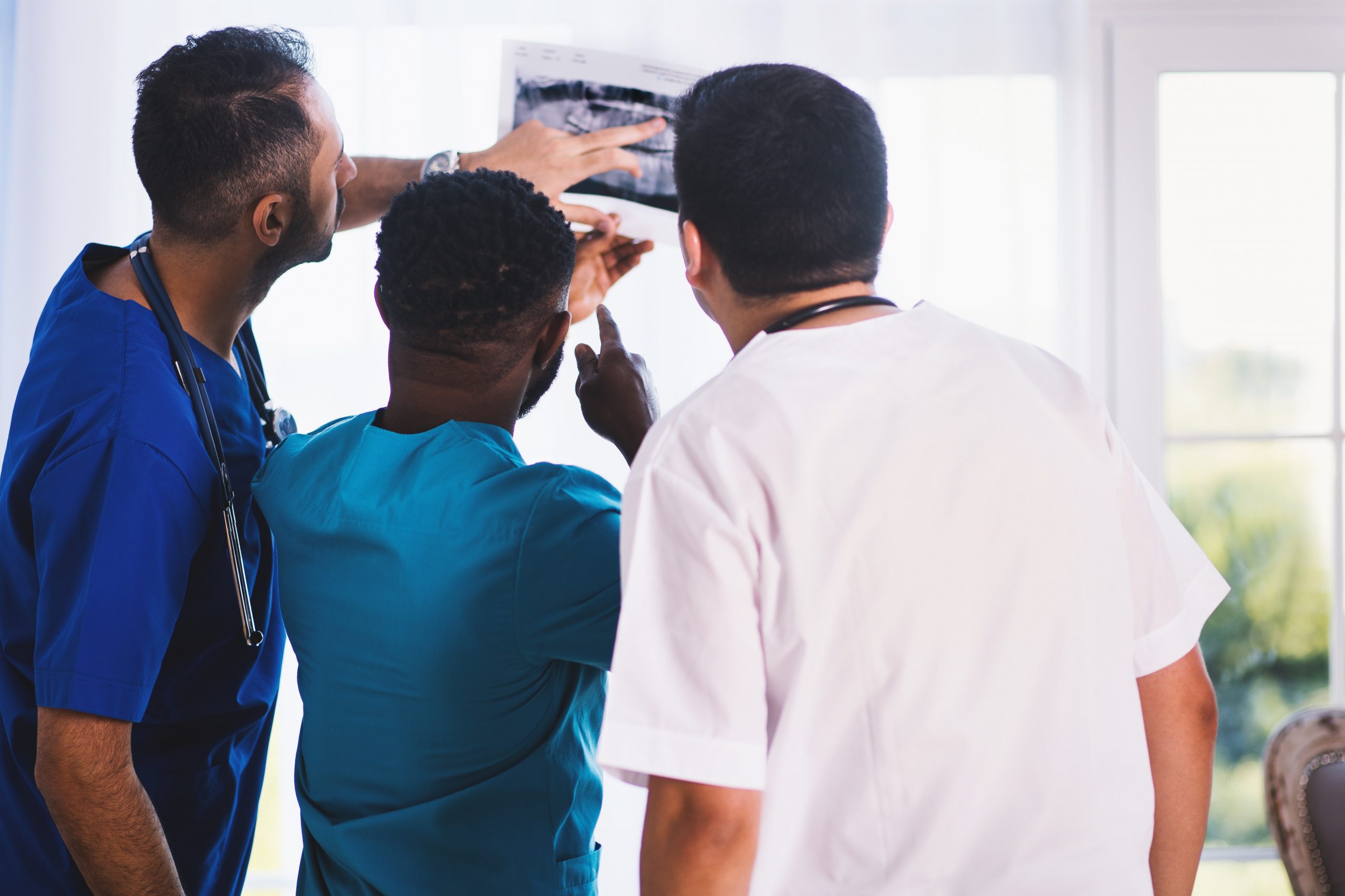 The effectiveness of laser therapy in the treatment of CRPS

Article based on a study done on Laser therapy in the treatment of CRPS.

Objective: The aim of this study is to estimate and compare the effects of laser therapy at a basic energy level and interference current therapy in patients with CRPS. A sample of patients with CRPS was studied for this analysis.

Patients were divided into two groups: one of these groups was treated with low level laser therapy and kinesiotherapy, while the second group of patients was treated with interferential current and kinesiotherapy. For the estimation of the therapeutic effect, the following parameters were tested: pain intensity, determined by visual analog scale while for the range of movement of the affected joint a standard goniometer was used.

The results of these treatments were different from group to group and showed that both physical procedures are effective in treating CRPS I, but the efficiency of laser therapy is statistically higher than interferential current therapy.

If we consider the treatment goal, it is therefore understandable why physiotherapy is the basis of any therapeutic protocol in the treatment of CRPS. Among the many physical procedures with analgesics, particular emphasis is placed on low level laser therapy (LLLT) and interferential current.

Low level laser therapy has specific therapeutic effects, such as analgesic and antiinflammatory effects and improvement of the tone of the sympathetic nervous system, with the aim of its normalization, which justifies its use in CRPS I treatment. Considering that LLLT is often used in the treatment of CRPS, it is important to determine whether the application of one therapy is more effective than the application of another.

In order to verify this, a study was conducted in which 107 patients over the age of 18 who had been diagnosed with CRPS I on the basis of the Budapest criteria were examined.

The diagnostic criteria were:

4) Sudomotor/edema: oedema and/or sweating ratios variations and/or asymmetry of sweat

The prospective study included a sample of 50 patients undergoing the first 10 therapies each day, 5 days a week.  To measure the result, the following was evaluated in order to estimate the therapeutic effects:

1) The intensity of pain at rest and during active movements

3) The range of motion of the affected joint.

The intensity of the pain was measured using a visual analogue scale (VAS), which shows the condition of the limb in the absence of pain. Pain intensity was measured separately at rest and during active wrist/ankle movements.

All patients underwent evaluation of each separate parameter before treatment and after the application of 20 therapeutic procedures.

The results obtained were analyzed by reference to social sciences and expressed as mean and standard deviation. After therapy, both groups showed a statistically significant reduction in pain and oedema and an increase in the margin of movement of the affected joint, compared to the baseline values. Statistical analyses have shown an improvement in group A and group B and in both cases the use of laser therapy has had a significant beneficial effect in reducing the intensity of pain and oedema.

Other studies have been conducted and have demonstrated the effectiveness of laser therapy in the treatment of CRPS pain. Its effectiveness not only stands out in comparison with more traditional modalities such as electrical stimulation, but is also used in other modalities and stands out in comparison with other therapies for pain prevention and side effects. In addition, recent research has shown that it can also be used in combination with cortisone treatments.

Another study conducted on a sample of 45 patients with unilateral CRPS treated with LLLT found a significant improvement and a greater decrease in pain in the group of patients treated with laser therapy. This study shows three important outcomes:

The benefits of laser therapy in just a few steps

Laser therapy uses a process called photobiomodulation. The photons enter the tissue and interact with the cytochrome c complex within the mitochondria. This interaction triggers a biological cascade of events leading to an increase in cellular metabolism and a decrease in both pain and inflammation. Unlike drugs, laser therapy reduces pain without undesirable side effects.

Patients receive long-term pain relief. While the number of treatments required may vary depending on the acuity of the condition, many patients experience lasting relief after only a couple of treatments.

When treating acute conditions with laser therapy, it is particularly effective when administered as soon as possible after the injury (assuming there is no active bleeding). The faster the inflammation is reduced and the healing process can begin, the better. In the event of an acute injury, laser therapy helps to restore normal body function more quickly.

In chronic conditions, laser therapy is used more often to combat pain and persistent inflammation. The new LightForce EXP 25 watt laser is used by doctors to rapidly reduce inflammation in patients suffering from chronic pain. This therapeutic laser is particularly suitable for the treatment of chronic diseases because it allows doctors to treat a wider area of interest while delivering therapeutically relevant dosages.

Each treatment can vary from case to case and be adapted to the specific needs of the patient and treatments are fast.

CRPS is still under discussion, as there is no single therapeutic protocol. The multifactorial etiology of CRPS I and the complexity of the physiopathological mechanisms have influenced the multidisciplinary therapeutic approach. But despite the use of a multidisciplinary approach, the desired results have not been achieved, because a high percentage of patients have a dysfunction of the affected extremity even after therapy.

Clinical experience indicates that outcomes in patients with CRPS in tertiary pain care settings are often inadequate even with aggressive pain interventions. However, there are also reports suggesting high rates of resolution. These discrepancies might be due to a substantial number of cases resolving with limited or no specific intervention early in the course of the condition, with a smaller subset of more persistent cases being seen in tertiary care pain clinics. A recent systematic review found some evidence to support this idea.

The most convincing evidence would come from studies of untreated patients with CRPS because confounding with treatment effects would not influence the results. One study looked at the natural course of untreated CRPS.Thirty patients with posttraumatic CRPS were followed without treatment for an average of 13 months after diagnosis; three patients were withdrawn from the study to be given treatment, and CRPS resolved over the study of 30 patients. Some may be skeptical of this extraordinarily high rate of CRPS resolution, yet other studies support relatively high, if not quite so dramatic, resolution rates for acute CRPS.

During these studies it’s came up the importance of understanding how patterns of CRPS change over time. One question is how quickly CRPS emerges after injury.

Although such data is sparse, the mechanisms involved in the emergence of CRPS (such as injury related sympathetic nervous system changes, peripheral and central sensitization, inflammatory and immune responses to injury) suggest that the initial onset of symptoms should occur within the first few weeks of the triggering event. A prospective study in a large sample of post-fracture patients found that CRPS was more commonly diagnosed at three months after cast removal than at cast removal, and that diagnosis rates decreased after three months.This suggests that CRPS develops during a three to four month window after the initial injury. The onset of CRPS symptoms after this three to four month window seems to be increasingly unlikely and difficult to explain mechanistically.

It is clinically shown that early intervention in CRPS will lead to better outcomes, although there are few high quality data to support this view. The potential importance of early diagnosis and intervention raises the question of how to distinguish between normal but delayed healing versus emerging CRPS. In both cases, an inflammatory presentation (a warm, red, and hyper- sensitive limb) is common. One potential discriminating factor is suggested by studies indicating that more severe pain early after fracture predicts those who will develop CRPS.

Results of a retrospective longitudinal study reporting outcomes over an average eight year follow-up period suggest that CRPS is more likely to resolve in patients initially diagnosed with warm CRPS, the most common presentation in the acute CRPS phase, than in those initially diagnosed with cold CRPS. Although there is no clear dividing line between acute and chronic CRPS, and these terms are inconsistently used in the literature, a recent prospective study of proinflammatory cytokines suggests that the inflammatory component that seems to underlie warm CRPS largely resolves within about 12 months of symptoms onset, at least in patients on active treatment.

This suggestion is supported by a recent report on patterns of cutaneous immune responses in patients with CRPS of different durations. Local accumulation of mast cells was increased in CRPS of less than three months duration but not in CRPS of longer than three months duration. Data regarding clinical features of CRPS also suggest that edema and warm or red skin, features caused by inflammatory processes, may become less prominent as the duration of CRPS increases. These findings parallel observations of a transition from warm CRPS to cold CRPS as the condition becomes more chronic. One cross sectional study suggests that sympatho afferent coupling, which may contribute to the sympathetically maintained component of CRPS pain, may also diminish over time. The prospective cytokine data above suggest that the transition from inflammatory warm CRPS to cold CRPS may start during the first year after injury, providing a possible marker for the transition from acute to chronic CRPS.

In treating these cases, studies were carried out on the effectiveness of laser therapy, and the purpose of the study was to compare the efficiency of laser therapy on patients with CRPS. The results obtained were better especially with regard to pain and oedema, especially in cases where ultrasound and diadynamic current were used in the treatment of 400 patients with CRPS I.

In this sample of patients the case of significantly higher pain was found in patients with shoulder syndrome after cerebral ischemia, compared to the group in which electrotherapy was applied.

Laser therapy has been effective for those who also reduce pain in numerous musculoskeletal and neurological disorders. Analgesic effects of laser therapy have also been found in patients with chronic pain syndrome.

It should be clarified that although laser therapy has been used for several years, the mechanism of action is still not entirely clear. Modulation of pain perception and increased production of endogenous opioids are just some of the following factors in the mechanisms of analgesic effects of laser therapy, considering that this analgesic effect is explained as a synergistic effect of different mechanisms.

In detail, laser therapy blocks the entry of Na+ into the cell, which is a stabilizing system and resting potential factor of the cell membrane, so that local pain transmission is prevented.

Locally, pain reduction can also be achieved indirectly through anti-inflammatories. The beneficial effect of laser therapy is to increase local microcirculation, which reduces oedema and increases tissue oxygenation, facilitating the elimination of halogen substances.

For the treatment of CRPS I it is always advisable to follow a combination of therapies, in particular a pharmacological treatment preferably based on neridronate, which has been proven effective in many cases, to a pathophysiological path since CRPS I is characterized by a reduced function of the joint segment concerned and its stimulation is necessary. It is also important to note that the application of aggressive physiotherapy can lead to the exacerbation of

Future research should aim at outlining the long-term characteristics of the therapeutic response and therapeutic effects of laser therapy in a larger proportion of patients.