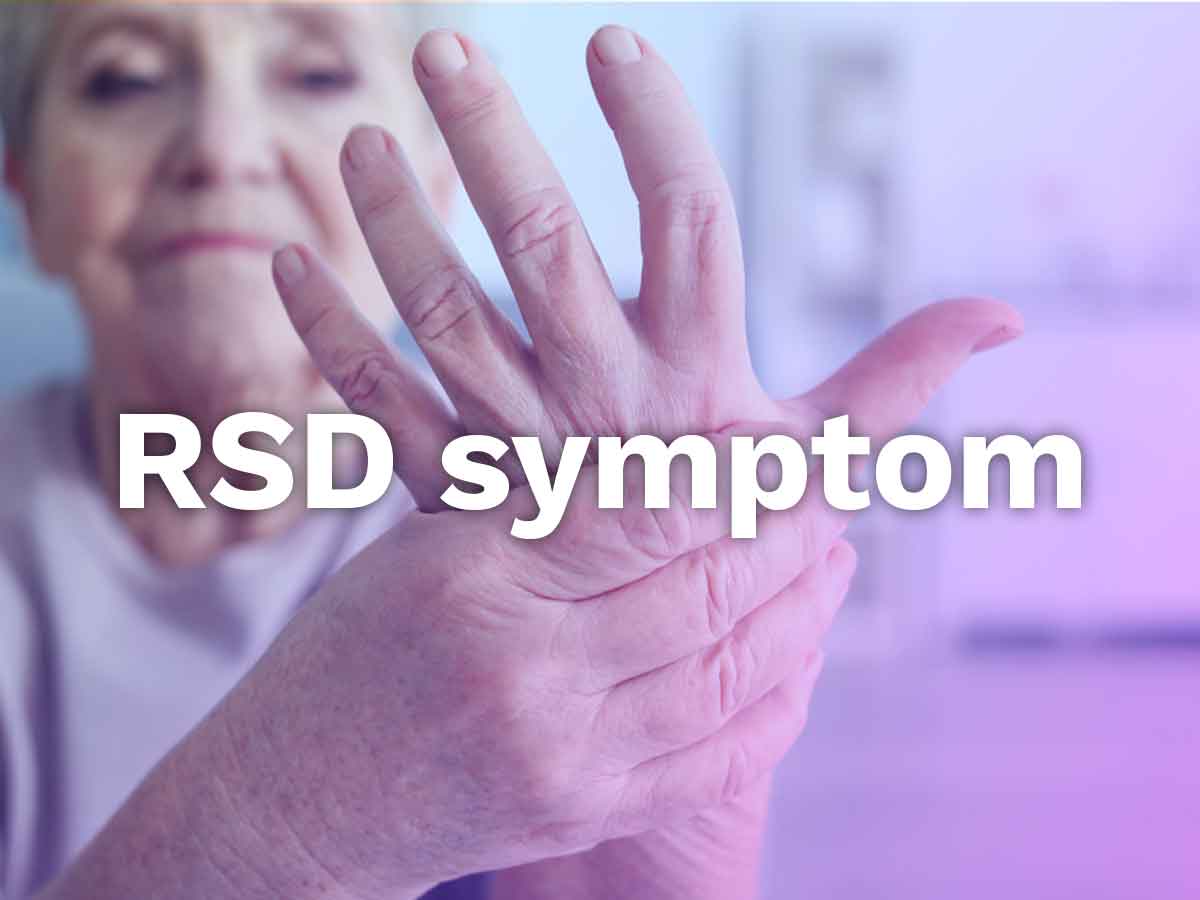 RSD (Reflex Sympathetic Dystrophy) is a chronic condition that is often identified by severe pain and other symptoms. RSD patients normally experience the pain in one limb, though the pain has been known to spread to other parts of the body in some cases.

RSD usually results from an initiating triggering event such as a broken bone, a sprain, a surgery, etc. However, in some cases it may be impossible to identify the precipitating cause of the condition as several noxious events may be responsible for its onset. Most RSD symptoms begin at the site of the condition which is usually a leg, arm, hand, or foot. If they are not treated as soon as possible, the symptoms may go from mild to severe and worsen the condition. RSD symptoms are believed to develop in stages from acute to chronic, and the further the condition advances, the less effective the treatments used will be.

What Are The RSD Symptoms?

RSD is difficult to diagnose, especially given that the exact cause of the condition is unknown. The best available way to determine whether a patient has RSD is by making a clinical diagnosis using the symptoms. In that regard, a diagnostic checklist called the Budapest Criteria is used to make this clinical diagnosis of RSD. The examiner checks the patient’s signs and symptoms to see if they meet the criteria outlined in the Budapest Criteria. If they do, then an RSD diagnosis is settled.

One of the challenges of making an RSD diagnosis is that the RSD symptoms do not always manifest at the same time. The most common RSD symptoms and signs fall under sensory, autonomic, trophic, and motor changes. These changes develop as a result of the effects of the RSD syndrome on the body which are seen as the symptoms listed below:

The pain is described as burning, aching, throbbing, or tingling in nature and is often aggravated when the affected extremity is in use. RSD pain is almost always disproportionate in intensity to the inciting event.

In general, hyperalgesia is a heightened pain response to noxious stimuli. Three different types of hyperalgesia affect RSD patients and these are mechanical, thermal, and deep somatic hyperalgesia. Mechanical hyperalgesia refers to increased sensitivity to mechanical stimuli which is a common occurrence in chronic pain syndromes such as RSD. Mechanical stimuli is defined as a stimulus produced by a physical change such as contact with physical objects or changes in pressure. Thermal hyperalgesia is a condition of altered perception to temperature changes and with this symptom, the patient experiences heightened sensitivity to noxious heat or cold. Deep somatic hyperalgesia occurs due to activation of pain receptors deep in the body including tendons, joints, bones, and muscles. This pain from deep somatic tissue is often aching in nature.

Due to vasomotor disturbances, the vasodilation and vasoconstriction processes stop functioning properly. When this happens, it interrupts with blood flow in the affected limb causing it to be decreased or increased. This leads to changes in skin temperature of the affected limb such that some RSD patients will have a cold extremity while others have a warm extremity in comparison to the other unaffected limb. These changes in blood flow also cause skin colour changes.

Oedema is a condition whereby excess fluid accumulates in the cavities or tissues of the body, resulting in swelling.

Hyperhidrosis is a condition that causes a person to sweat less than usual, while hyperhidrosis is a condition characterised by abnormally increased sweating. Abnormally high sweating is a direct result of abnormal vasodilation. Since vasodilation is exaggerated in RSD patients, the affected limb will give an exaggerated response to changes in temperature, even if it’s not hot enough to warrant that kind of response. As a result, the patient will sweat even after light physical activity. Conversely, hyperhidrosis is related to abnormal vasoconstriction where the blood vessels contract to retain heat, hence keeping the affected limb from sweating.

RSD causes the rapid growth or loss of hair, fingernails and toenails. Abnormal nail growth is a common occurrence in CRPS patients caused by constriction of blood vessels in the hands or feet due to repeated exposure to the cold. It is also a result of flare ups whereby the symptoms worsen for some time, usually due to emotional stress. The flare ups cause inflammation and poor circulation to the extremities, hence affecting the growth of toes and fingernails.

The skin on the affected limbs in RSD patients may sometimes seem thin and shiny. Several skin diseases and conditions such as oedema and inflammatory lesions are often associated with RSD. Skin problems usually occur in patients with long-standing RSD and can often be difficult to heal.

Most RSD patients experience motor impairment such that their ability to use their limbs for movement decreases and this is typically associated with weakness. If this is left untreated, it may lead to atrophy and loss of use of the affected extremity.

Tremors are involuntary movements resulting from motor dysfunction associated with the onset of RSD.

This is a movement disorder whereby the muscles contract uncontrollably, causing involuntary movements in the body parts such as twisting, repetitive movements, and abnormal postures.

Coordination deficits originate from the malfunction of the cerebellum which is the part of the brain that coordinates voluntary movements and controls balance. This is why certain treatments that combine mental and physical activities are necessary to train the brain to enhance motor coordination and function of the affected limbs.

Psychological issues are a result of RSD, more than a trigger for it. The most common psychological disturbances associated with RSD are anxiety, depression, post-traumatic stress disorder, and emotional stress. Emotional stress usually leads to the flare ups mentioned before.

Other RSD symptoms that may be seen in all or some of the limbs typically affected by RSD are:

There are three clinical stages of RSD; namely acute, subacute, and chronic.

For the first three months, a burning pain is usually the first symptom followed by swelling, hyperhidrosis, coolness to the touch, and redness with vasomotor instability which results in increased dependency. Another physical change that can occur in this stage is demineralisation of the underlying bony skeleton as a result of disuse of the limb.

If treatment of RSD does not begin in the acute phase, the condition may progress to the second stage which can last up to nine months. The subacute stage is characterised by persistent, severe pain in the affected limb, and fixed edema. Due to the increase in severity of pain, the affected individual finds it difficult and painful to move the affected limb. Prolonged disuse of the limb causes loss of function. In this stage, there is also thickening and scarring of connective tissue in the joints caused by chronic inflammation. This also greatly contributes to loss of function.

The chronic stage is the last stage that may develop approximately 1 year after the onset of the disease. This stage may last for several years or become permanent. For some individuals, RSD symptoms fade away during this last stage. However, for those not so fortunate, the symptoms may actually become worse. During the chronic stage, the pain level varies and may subside or continue undiminished. Edema may subside over time and the skin will be dry, pale, cool, and shiny. Stiffness of the affected area, as well as loss of function are more pronounced.

An RSD diagnosis is made through observation of the signs and symptoms the patient exhibits and reports. The Budapest Criteria mentioned earlier in the article is used to identify cases of RSD in patients. On its own, the Budapest Criteria diagnostic tool for RSD is quite accurate and rarely misses an RSD diagnosis. However, it also has its limitations on account of the fact that it relies on RSD symptoms which do not have a fixed method or duration of progression in each patient. To counter this problem, some medical tests are used in addition, mostly to eliminate other medical conditions that may be mistaken for RSD.

Although RSD symptoms in infants have rarely been observed, a few cases have been reported in children. Children with RSD may have bone or soft tissue edema that are visible on MRI scans and can be mistaken for stress fractures or injury. RSD diagnosis in children is established by studying the patient’s history and through physical examination. RSD symptoms in infants may vary but the most common is prolonged pain. Children with RSD may also developed an increased sensitivity to touch and pain in the affected limb, changes in temperature, skin colour and swelling of the affected limb, stiffness in the affected joint, and problems coordinating muscle movements.

Children may have localized pain to the affected limbs and experience RSD symptoms in hands, neck, wrist, and feet. The stages of RSD symptoms described above are not normally seen in children and the duration of RSD symptoms in infants does not affect or influence their response to treatment. Intense physical and occupational therapy have proven to be more effective in treatment of children with RSD, and these RSD treatment options are relatively side effect free. RSD has a better prognosis in children than in adults and most children have been seen to recover faster than adults.

As with all medical conditions, recognising the signs and symptoms  and addressing them as early as possible is key as it can mean the difference between recovery and progression of the disease. The RSD symptoms are quite common and similar to symptoms of many other medical conditions such as  arthritis, Raynaud’s disease, and many others. Getting a definite diagnosis from a medical practitioner is therefore important to ensure accurate and quick treatment.